ToF can confirm that this is indeed true, the renowed theoretical physicist known for his work on “Black Holes and Relativity” has died at the age of 76, according to family sources and reported by several main stream media including the BBC and theguardian 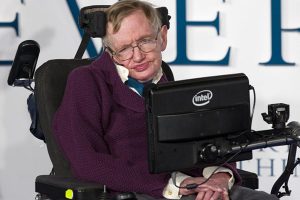 He was given only few years to live at the age of 21 after being diagnosed with a rare form of motor neurone disease but went on to defy science (ironically) and lived 55 years more.

Professor Stephen William Hawking was born on 8th January 1942 (exactly 300 years after the death of Galileo) in Oxford, England. His parents’ house was in north London but during the second world war Oxford was considered a safer place to have babies. When he was eight his family moved to St. Albans, a town about 20 miles north of London. At the age of eleven, Stephen went to St. Albans School and then on to University College, Oxford (1952); his father’s old college. Stephen wanted to study mathematics although his father would have preferred medicine. Mathematics was not available at University College, so he pursued physics instead. After three years and not very much work, he was awarded a first class honours degree in natural science.

In October 1962, Stephen arrived at the Department of Applied Mathematics and Theoretical Physics (DAMTP) at the University of Cambridge to do research in cosmology, there being no-one working in that area in Oxford at the time. His supervisor was Dennis Sciama, although he had hoped to get Fred Hoyle who was working in Cambridge. After gaining his PhD (1965) with his thesis titled ‘Properties of Expanding Universes‘, he became, first, a research fellow (1965) then Fellow for Distinction in Science (1969) at Gonville & Caius college. In 1966 he won the Adams Prize for his essay ‘Singularities and the Geometry of Space-time’. Stephen moved to the Institute of Astronomy (1968), later moving back to DAMTP (1973), employed as a research assistant, and published his first academic book, The Large Scale Structure of Space-Time, with George Ellis. During the next few years, Stephen was elected a Fellow of the Royal Society (1974) and Sherman Fairchild Distinguished Scholar at the California Institute of Technology (1974). He became a Reader in Gravitational Physics at DAMTP (1975), progressing to Professor of Gravitational Physics (1977). He then held the position of Lucasian Professor of Mathematics (1979-2009). The chair was founded in 1663 with money left in the will of the Reverend Henry Lucas who had been the Member of Parliament for the University. It was first held by Isaac Barrow and then in 1669 by Isaac Newton.  Stephen is currently the Dennis Stanton Avery and Sally Tsui Wong-Avery Director of Research at DAMTP. Read more